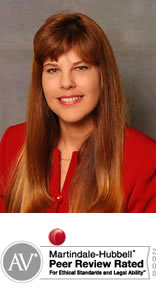 Donna Joy Hunter, a native Miamian, has been with the firm since 1993. She was admitted to the Florida Bar in 1990 and is also admitted to practice before the United States District Court for the Southern District of Florida. Her practice consists primarily of commercial insurance defense work for private businesses as well as governmental and educational institution clients. In addition, Ms. Hunter defends major insurance companies in first and third party suits and handles suspected insurance fraud matters through various insurance firm’s special investigative units. She has an AV rating from Martindale-Hubbell®.
Ms. Hunter attended college at Stetson University and graduated with a B.S. degree in Business Administration and Human Resource Management from Florida State University in 1987. She graduated from the University of Miami School of Law in 1990. While a law student, Ms. Hunter served as a judicial assistant intern to United States District Judge William M. Hoeveler during the 1988-1989 academic year. She also participated as a certified legal intern in the felony division of the Dade County State Attorneys’ Office during the 1989-1990 academic year. Ms. Hunter was listed in Who’s Who Among American Law Students and was on the editorial board of the University of Miami Entertainment and Sports Law Review.
Ms. Hunter has participated in the Dade County Bar Associations’ Put Something Back Program – Pro Bono Project. She is also a member of the American Association of Justice, formerly known as the Association of Trial Lawyers of America; Dade County Bar Association; the Defense Research Institute; the South Florida Claims Association.
Ms. Hunter is an active supporter of the American Cancer Society and is involved with the Boy Scouts of America (“BSA”) where she volunteers her time as an Assistant Scoutmaster for BSA Troop 457 located in Pinecrest, Florida.