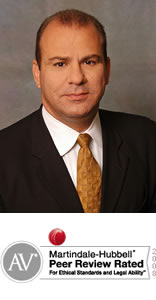 Mr. Garcia was the chief consultant in the drafting and subsequent revisions to the Seminole Tribe of Florida’s Workers Compensation Code and is admitted to the Trial Bar of the United States District Court for the Southern District of Florida.

Mr. Garcia defends Employer/Carrier’s statewide and has a diverse portfolio of clients including Benihana, The Miami-Dade County School Board, The Seminole Tribe of Florida, Sedano’s Supermarkets, The City of Coral Gables, The City of North Miami Beach, Miami Dade College, Coca-Cola, Duty Free Americas and other corporations and governmental institutions, as well as major insurance companies and Third Party Administrators.